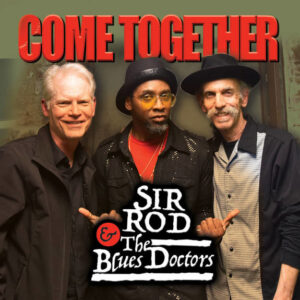 Harmonica wizard and blues historian Adam Gussow
Put together a blues duo in the 1980s
With guitarist and vocalist Sterling Magee,
a.k.a. Mr. Satan and the played the streets of
Harlem as Satan & Adam before taking their
Tour on the road. Gusso chronicles the story
In his 2007 book Journeyman’s Road, and he
Released a double DC of their work. Word on the Street:
Harlen Recording, in 2008. The 2018 documentary Satan & Adam, directed by
V. Scott Balcerek, also tells the duo’s story. In late 2019 Gussow received an email
from Rod Patterson, Mr. Satan’s nephew, suggesting they put together a Satan & Adam tribute tour.
Vocalist Patterson traveled to Gussow’s studio in
Mississippi, where Gussow’s partner, guitarists Alan Grows, joined them, and they laid down
more than half of the tracks for this album.

The album opens with a straight-ahead
Chortling blues. Come Together, an anthem
that’s just right for our time. Riding on Gussow’s
propulsive harp blows, Patterson declares
When we fight nobody wins,” pleading that “we need to open our minds,” we need to open our eyes /
We need to open our ears / we need to open our hearts / we’re too much stronger together / we really need each other.”
Gussow’s fiery trills on the instrumental bridge scald with their blazing defiance and beauty. The trio turns in a leisurely stroll on
Mr. Satan’s son Sanctified Blues–a song that
Perfect captures the Saturday night / Sunday morning nature of blues and gospel, poverty
And spirituality–before turning into a quick blues
Shuffle on the refrain. Patterson delivers a soaring, gritty version of the James Brown
Standard / Got You ( I Feel Good), and the trio’s
Take on the classic slows it down to capture the slow-boring elation of the song.
The trio offers up a killer version of Willie Dixo’s Little Red Rooster–Patterson vocals play call and respond with Gussow’s harp–child Patterson
Lays down a sparking river of piano on his own song, the moaning and shouting So Mean. The album closes with a jump blues version of the
Ray Charles classic What’d I Say.
Come Together might have started as a one-time meeting, but let’s hope that the
Trio has more songs in the can for another album. The three found magic in the studio,
producing some sizzling tunes that honor some sizzling tunes that honor Mr. Satan and priming more great blues movers
From the trio.